Home i Articles i Trends i Victor Ehikhamenor 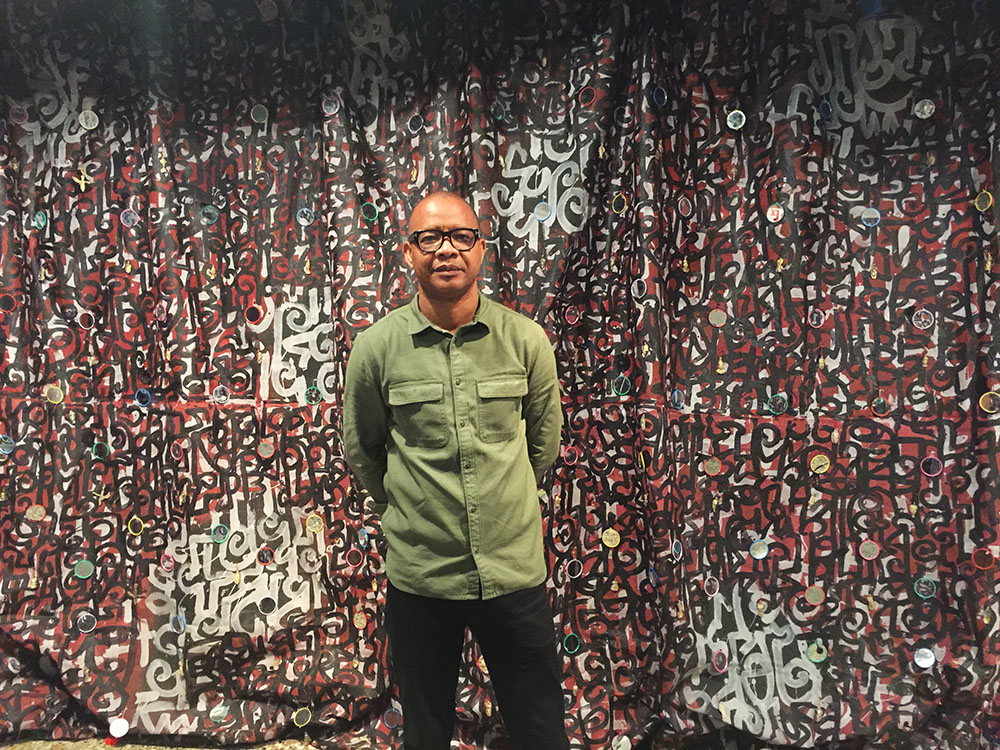 One of Africa’s most innovative contemporary artists and one of “42 African Innovators to Watch”.

Victor Ehighale Ehikhamenor is a Nigerian visual artist, writer, and photographer, once described as “undeniably one of Africa’s most innovative contemporary artists” and one of “42 African Innovators to Watch”. In 2017, he was selected (along with three other artists) to represent Nigeria at the Venice Biennale, the first time Nigeria would be represented in the event.

Ehikhamenor was born in Udomi-Uwessan, Edo State, Nigeria. He was educated in Nigeria and in the United States. He returned from the United States in 2008 to work in Lagos. His work is strongly influenced by work done by villagers especially his grandmother who was a cloth weaver. His uncle was also a photographer, his maternal grandfather a blacksmith, and his mother, a local artist.

He is also inspired by wall paintings and installation arts, mostly in community shrines. This has been an enduring feature of his work, which is abstract, symbolic and politically motivated; and influenced by the duality of African traditional religion and the interception of Western beliefs, memories, and nostalgia. Ehikhamenor’s art and photographs have been used for editorials as well as cover art on books by authors such as Chimamanda Adichie, Helon Habila and Chika Unigwe. They have also been illustrated on fabric and exhibited at international fashion parades.

Ehikhamenor has held numerous solo art exhibitions across the world. In 2016, he was one of 11 Nigerian artists invited to join twenty-three Indonesian artists in the grand exhibition at the Biennale. At the Jogja National Museum, he showed an installation titled “The Wealth of Nations.”

He has also published numerous fiction and critical essays with academic journals, mainstream magazines and newspapers from around the world including The New York Times, CNN Online, Washington Post, Farafina, AGNI Magazine and Wasafiri. His short story, “The Supreme Command”, won the Association of Commonwealth Broadcasters Award in 2003. His debut poetry collection, Sordid Rituals, was published in 2002. His second book, Excuse Me! (2012), a satirical creative non-fiction view of life as an African both at home and abroad, is a recommended text in two Nigerian universities.

In February 2018, Ehikhamenor opened Angels and Muse, described as “a multi-modal co-working space in Lagos draped with wall murals, stained glasses, and beautiful lighting, making for a stunning visual and immersive experience.”The space, also used for artist residencies, is located in the Ikoyi area of Lagos state and contains a ‘multidisciplinary room,’ used for “workshop, training, book reading, experimental or conceptual art exhibitions, among other usages.”The project was featured on the 10th episode of the Netflix ‘Amazing Interiors’ series in July 2018.

Ehikhamenor was one of the first artists invited to Art Dubai in March 2018.

In July 2018, he was also one of the Nigerian artists selected to meet and exhibit work for visiting French President Emmanuel Macron.The exhibition, organised by ART X Lagos took place at the Afrika Shrine, the nightclub of Femi Kuti.