Home i Articles i Trends i Batila 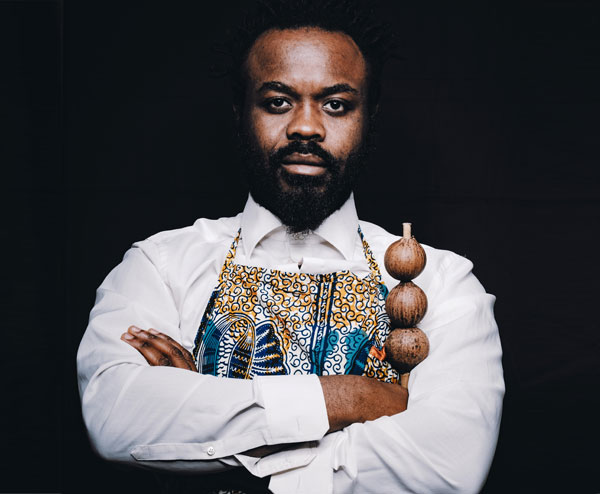 If music is food for the spirit

If music is food for the spirit

Describing Batila’s recipes is as intriguing as talking about the man himself. He creates a vibrant mix of sound that is as colorful as his background. It is an unusual mixture of ingredients, skillfully combined to create a final result that is delightful and stimulating to the senses.

afrolifestyle: You grew up in Germany where your family emigrated from Congo, bringing the entire culture as a unique physical link of your country. When did you realized, that you have to be on stage as a musician?

Batila: Well, I didn’t really realise because it just happened. What I realised is that i had a certain presence on stage the audience seem to appreciate.

afrolifestyle: You are deeply connected with Congolese music. Who has influenced you the most?

Batila: I cannot say that a specific artist influenced me the most because I need to feel the music, the message, it needs to hit my heart so I can say a bunch of Congolese Artists. Although Papa Wemba, his style of singing,  his open mind and the courage to fuse traditional music with modern and of course his stage presence always impressed me. Also, his spirit always want to connect to the youth and La Sape of course. So let me just say ” VIEUX BOKUL” ( PAPA WEMBA) and the overall ingenuity of Congolese music.

afrolifestyle: How would you describe your music?

afrolifestyle: What were the most challenging moments in your music career

Batila: When you are down, completely broke, distracted by life and you still have to continue. when everyone has doubts but you need to stay focused. Its an everyday challenge I guess because I believe in my original music

afrolifestyle: You also have a passion for fashion and design. How would you describe your performance style on stage?

Batila: I don’t really have a passion for fashion. I want to call myself a stylish person but not at all fashionable. I like unique looks, simple but still outstanding. I love colors but I am also into Black. My style of performance, I can’t really say, it depends a lot on my inner mood. But I always want to give the best of myself to the audience. I love it when I see the audience enjoying as much I am. I also like to shock them sometimes. I just perform

afrolifestyle: As a seasoned singer/songwriter and performer you are now based in Berlin. What are your plans for the future?

Batila: Africa is the future above all – but for the near future definitely the release of my Album TATAMANA, Touring, and many collaborations with various artists.

afrolifestyle:  Thank you for the interview!

Batila grew up in Germany where his family emigrated from Kongo over a decade ago, bringing with them their entire culture as a unique physical link of their country. Although been in Europe and influenced by Hip-Hop, R’n’B and Rock, he was deeply connected with his African roots: the popular Congolese music which has matured his passion threw artists such as Papa Wemba, the poetic songs of Simaro Lutumba, Rocherau Tabuley, Franco Luambo Makiadi, also Alpha Blondy, Billy Ocean, George Benson, Peter Tosh, Tracy Chapman, the roots, Bob Marley and many more– who have influenced his songwriting skills and the way to express his feelings in the form of melody. Writing inspirational songs in English, German, Lingala and sometimes in French, his sweet and mellow voice can deeply drive us through his own world seasoned by various human feelings. Onstage he is in his element and has for over a decade rocked countless crowds. His vocal skills have over the years kept him in demand as a featured artist on a variety of material from Hip Hop to House.

If music is food for the spirit and Batila a chef, describing his recipes is as intriguing as talking about the man himself. He creates a vibrant mix of sound that is as colourful as his background.It is an unusual mixture of ingredients, skillfully combined to create a final result that is delightful and stimulating to the senses. He is a seasoned singer/songwriter and performer now based in Berlin. Influenced by Kinshasa, London and now Berlin he has been patiently crafting material for his debut album knowing a wholesome meal takes time to prepare.

The LP will be recorded live to capture the special magic that comes with playing together. For additional overdubs different Artist friends will be invited to emphasize the originality of certain titles. From the textual content, the forthcoming Album explores African spirituality, takes a critical look at society, and questions love relationships that have been experienced not in a gloomy manner but rather hopeful.